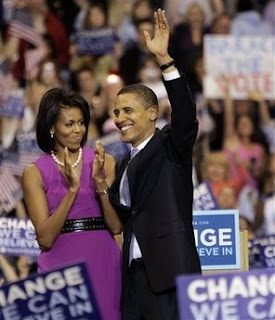 Senator Barack Obama clinches the Democratic Presidential Nomination and the political season continues toward the November general election. 2008 promises to be one of our most remarkable years to date. With a woman coming in as a very close second, breaking down barriers and cracking the glass ceiling for next time, things are looking up. We need major changes if we are to grow as a nation and not further sink into despair. With so many falling through the cracks, safety nets non-existent for the masses and the cost of living simply ridiculous, we have to get it right in the next election. I believe Americans will weigh out options and choose who they believe is the person to lead us out of this economic downfall to brighter days!
It starts with hope, followed by action, counsel and sound decisions in favor of the people, all people and not just the wealthiest of our citizens. I believe we can change things before it's too late!
Alicia Sanders
Posted by Alicia Sanders at 11:09 PM