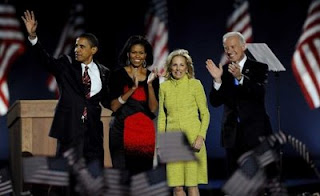 2008 didn't disappoint and neither will 2009 because so much is going on with our economy; wars, unrest around the world, from Africa to the Middle East to Asia, the cost of living and the mental depression so many of us battle will most definitely spill over into our new year!

Here's my rant and rave:

I'm delighted that we have a new President, Barack Obama, one who's bringing people together in really tough times. Happiness is still within reach, our choices dictate the outcome. As many lose, many will gain. Happiness or a peace of mind isn't just for the rich and famous. Our last Presidential Election gave us something to believe in that's positive and nurturing. It helped to better unite this country, diversities and all and the ripple effect will continue.

In 2008, we saw celebrities out of control, comebacks and good prevailing over evil. Britney Spears is on the road to recovery with a documentary that gives insight to some of her angst, a chart topping new CD, Circus and awards with more to come! Go Britney, we only think we know what it's like to be in your shoes. I know money and fame isn't everything and some would say, "what does she have to complain about?" LIFE and all its twists and turns and no one goes exempt.

CNN's "Heroes" Tribute demonstrates the power of the human spirit to endure and how everyday citizens of the world can make a difference. It was awe-inspiring to see how a little can go a long way and just how resilient and tender hearts change our world. We haven't all become jaded, apathetic and corrupt.

I read in December's O Magazine, an interview with Oprah and Daniel Pink, author of "A Whole New World" that's kept me thinking! He's written a book about "Right Brain" people and how it's our time. The ‘Right Hemisphere of the Brain is all about, Artistry, Empathy, Inventiveness, Etc.' and the ‘Left Hemisphere of the Brain is all about the Logical, Linear, Etc...,' says Pink.

Well, just the article alone has encouraged and inspired me greatly. Because for most of my life, I've always felt out of place in a society that wants to know, "how are you gonna make money doing that?"

So much has changed with our information age and now Daniel Pinks says we're in the conceptual age where the big picture, design and empathy reigns supreme. "Six Particular Abilities, or Senses: Design, Story, Symphony, Empathy, Play, and Meaning, are so very important in the work place, as well as in the world in general, he says"

Well, this seems to be on target. Look at all the reality TV shows. People want to have fun jobs, doing work they're passionate about and being paid well, mostly in the entertainment industry. It used to be to become a doctor, lawyer, engineer, accountant or senior level business executive were coveted occupations that were considered elitist, highly profitable and upper class. Well, today, we want it faster and a lot more than ever before. A fast track nowadays is instant fame and lucrative contracts, mega deals from reality shows (Paris Hilton and The Kardashians) to music celebrities (Christina Aguilera, Jay-Z, Beyonce, Rihanna) to top box office actors Reese Witherspoon and Scarlet Johansen, to sports figures like Tiger Woods and Maria Sharapova. Actors sell many products, instead of using models, rising or established brands/entertainers dominate. The supermodel is virtually gone. Kate Moss and Naomi Campbell are still at the vanguard of the fashion industry, along with other familiar faces. But now actresses Eva Mendez, Kerry Washington, Hayden Panettiere, Nicole Kidman, Keira Knightly and others grace leading fashion magazines with lush product ads (think "The Gap"). We won't go into the massive merchandising generated from TV shows like the "The Hills" and "Gossip Girl."

With this economic meltdown, a nightmare for many, what are we going to do or invest in? Escapism, realism and sensationalism is inviting in tough times and this era will be no different. From escalating numbers of lottery tickets being purchased at the mere change of economic freedom or salvation, to 24/7 news cycles that are much about nothing, to more celebrity worship and voyeurism of the lifestyles of the rich and famous. Great art whether in books, films, theater, dance, fashion, painting or photography to unlimited "green projects" and an increase in raw foods consumption are beautiful life forces and alternatives. Our world is changing and we're coping, adapting and revisiting traditional values through all of this mayhem. We're becoming better consumers and independent thinkers, due to Madoff's billion dollar Ponzi Scheme, AIG, Lehman Brothers, Fannie and Freddie Mac, U.S. Automakers tanking and so on..., to take responsibility to protect ourselves from wolves in sheep clothing.

As we see more and more job cuts, not to mention the amount of industry that has already been outsourced and most likely won't be returning in any life-altering measurement, people will get "creative." The sky isn't falling, but many are losing their footing and literally going under. It's tragic and as things will get worse for many Americans, this is also the time many will flourish. This is where the "right brain" thinkers can stake their claim and go for broke. In this economy, you don't have anything to lose. Many jobs are overseas, the banks' lending will be extremely cautious, making it difficult for new and even established businesses to secure loans. Consumers with money are going to scale back with a "wait and see" approach to spending. With all this gloom, there's a silver lining, borrowing the Nike slogan "just do it!" Of course, carefully map out your options and create detailed business and personal life plans and continue to dream and work to make them come true. Don't become immobilized by all the dreaded news we'll be hearing for some time to come. Just remember, everyone isn't facing job loss and foreclosure and new ventures will set sail and new millionaires made and it could very well be you! What's important in this new year is to live your best life ever and what that entails for you is as individual and distinct as your DNA. Have as much fun as possible, help others, learn more, try something different and continue to put one foot in front of the other, just keep showing up as life undoubtedly unfolds.