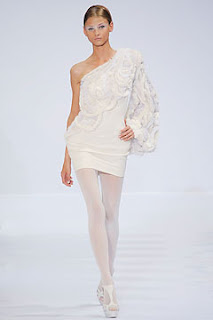 Lebanese designer Elie Saab has long been a leading name in haute couture in the Middle East, where his romantic, crystal-encrusted gowns attracted princesses to his Beirut atelier, opened in 1982 when he was just 18 years old. His ready-to-wear line, which launched in 1998 in Milan, heralds the same feminine aesthetic as his couture dresses, with brightly colored silks, chiffons, pearl beading, and embroidered lace. With their Middle Eastern detailing and European sensibility, Saab gowns are also at home on the Hollywood red carpet; Halle Berry famously wore one to pick up her Academy Award in 2002.


“He likes sexy, embroidered gowns. Period. Sequins—the more the better. Flounces, fringes and everything that glimmers—give him more.”—WWD
Posted by Alicia Sanders at 12:06 AM