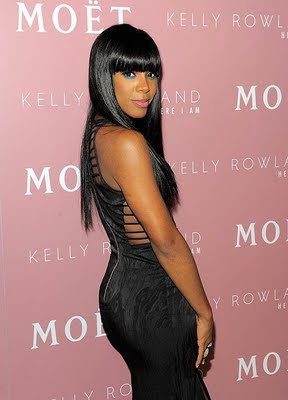 Kelly Rowland, member of the girl group Destiny's Child has released her third solo studio album, Here I Am. She's been burning up the Billboard charts with her number 1 R&B monster hit "Motivation!" But, was it enough to sell albums? Well, her numbers aren't bad, Hits Daily Double has predicted Kelly will sell approximately 75 - 77 K...not bad since we've seen virtually no promotion. Maybe Kelly's camp know something we don't? Kelly is the underdog story people love to root for and see do well!

After years of playing a supporting role as she did in the singing group that launched her former bandmate's career, the talented and  iconic Beyonce, Kelly is treading new waters. She dropped Beyonce's father and their long-time manager, Mathew Knowles, spends a great deal of  time overseas and currently as a judge of Britain's X-Factor, a talent contest program, completed a fitness workout DVD among other projects, Kelly's quite busy building her new brand/career! I say new because with her past offerings, Kelly didn't seem to have the drive nor persona as a commanding leading lady either in song or in film. But, after her June BET performance of her hit single, "Motivation" and recent interviews...people took a second look and I do believe we haven't seen anything yet!

Here are photos from Kelly Rowland's album release party...attended by many industry insiders and fellow artists, along with her old DC sisters!

Posted by Alicia Sanders at 1:07 PM