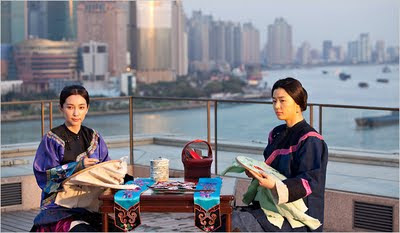 This film is meeting mixed reviews. Well, it won't stop me from seeing it for myself. Adapted from the New York Times Best-selling novel by Lisa See and with Wayne Wang at the helm as Director, most notable for his direction on The Joy Luck Club, it can't be bad. From the reviews I've read, I believe we're just uncomfortable with anything that extracts true and deep unconscious or conscious emotion.

Films like Snow Flower and The Secret Fan can make us feel vulnerable and have a good cry, so we call it a soap opera. It's considered cheesy and the real story was left untold. That's a matter of opinion. Personally, I'm always curious when a film receives mixed reviews to see which side I'll land on. Sometimes a film with mostly bad reviews, I might find compelling or at the very least entertaining.

So I'll be the judge of Snow Flower and The Secret Fan and take in all its beauty, the film is set in 19th century China traveling time with two childhood best friends.  I love "chick flicks!"

Posted by Alicia Sanders at 5:23 PM