This year's Oscar season has been exciting and ultimately the winners predictable based on other award shows. But, were so many surprised when Meryl Streep won Best Actress in a leading role, a well-deserved win! It was a surprise to not only the audience and viewers, but to Streep herself who seemed totally shocked, emotional and quite pleased! She won over the most talented Viola (super actress) Davis from the film "The Help." Viola will be just fine, she's got the goods! On a high note, we did get to see one of her co-stars and BFF take center stage as she accepted her Oscar for Best Actress in a supporting role. An emotional Spencer received a standing ovation as one of Oscar season's biggest buzz. It was disappointing that George Clooney didn't snag an Oscar time around, but it's coming, really it is! Until then, let's enjoy the 2012 winners and the spectacular gowns our eyes feasted on! Congratulations to all the winners!!! 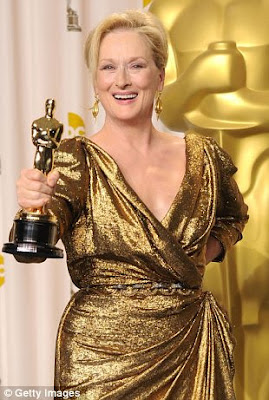