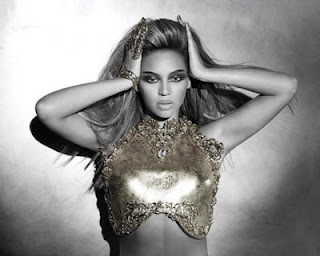 I don’t think so many people hate Beyonce as they tire of the thousands to millions of media impressions she generates. From her music, radio, tv ads to interviews to magazine covers, endorsement deals, blogs and gossip websites, Beyonce hasn’t been out of the public eye for one minute. I think she has a wonderful singing voice and range; her music is very commercial but, really inferior to her fabulous singing ability. I feel the same about Mariah Carey. This business make these artists think "image first." The “sex symbol” image and being at the very top is a difficult place to hold on to, especially, when there’s nowhere to go but down. Beyonce is working hard to stay and comfortably transition when her time comes (think Jennifer Lopez, Brandy and Janet Jackson). When Beyonce rose to the top, she was one of the most absolute beautiful women in the industry. But, now we have other very popular singers, who may or may not be as physically beautiful as she, but project their own sense of style and beauty, along with a great fan base, i.e. Rihanna, Alicia Keys, Chrisette Michelle, Jennifer Hudson, Tamia, Ciara, Keyshia Cole and others. There's newcomer Estelle, who may not be considered beautiful by some, I think she's beautiful with a megawatt smile ("Pretty" Video), she’s fastly gaining popularity and has a wonderful style, is original and can really sing! Then we have artists who will be touring and making music whether or not they go gold or platinum and we'll be standing in line for tickets: Jill Scott, Erykah Badu and Mary J. Blige. Other true, talented and insightful vocalists like Lina, Rachelle Ferrell and Goapele also have a place in the sun.

The "image first" policy is fading as record industry sales continue to decline. We got accustomed to “eye candy” and have access to music 24/7 without even buying it (You Tube and Demand TV). So now, we’re coming back to a place where we’ll be seeing more singers who look good, but can really sing. Beyonce won’t be the novelty she once was in the face of evolution–-change. I thought about this in watching Annie Lennox perform on the 2008 American Music Awards Show and was completely mesmerzied. I almost forgot what it felt like to actually listen to an artist instead of watching them. Beyonce gave a great high energy trademark performance and wowed! I loved the variety of artistry that took center stage that night and hope to see more! Looks aren't everything, they do help and certainly make a difference where success is concerned. Today's top artists have a very difficult job and juggling act.

The number one spot is difficult to manage. Janet Jackson was number one for a long time, but we also had Whitney Houston, Sade and Anita Baker and no one over shadowed the other and they never sold tons of products (endorsements) either, which also added to their shelf life, they left us wanting. They all did their thing and this is where the industry is headed back to and this means there’ll be more opportunities for a variety of entertainers striving to reach the top. Beyonce’s camp generate controversy by keeping her image in competition with other artists, i.e., Ciara and using a very similar song title and theme "Like A Boy"(Beyonce's "If I Were A Boy") or Rihanna, Beyonce coping her edgy look for a magazine cover liken to the "Disturbia" Video and other media. People will automatically make judgments and comparisons and she be deemed the prettest (the standout) and in many cases she is, but this marketing strategy is fading fast. There won’t be one or two top performers, but a selection and many selling gold records will be as profitiable as a select few dominating the airwaves multiplatinum style.

Survival is the name of the game for all of us!

Be original, think for yourself and remember you, too, are a role model…worthy and beautiful with or without a glam squad, a ring on your finger, a Ph.D, a fat bank account or celebrity status…we’re all the same at the end of day…human, loving, deserving of the absolute best, compassionate with unlimited possibilities…WOMAN…MAN…AWESOMELY CREATED!