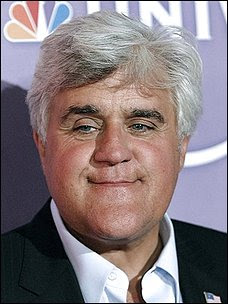 Well, Jay Leno is definitely making history with his new prime time show! The Jay Leno Show premiers September 14th, Rihanna,Jay-z and Kanye West Kick-off this "must-see" TV event! Leno says he's not doing the "Tonight Show." Whatever the format, I'm just happy that our beloved Jay Leno is back! It just seemed to soon to say goodbye to a man who's been in our lives via late night television from 1992 - 2009, taking the helm as the legendary Johnny Carson bid us a fond farewell after 30 seasons. Many thought NBC was completely nuts to replace Leno with funny man Conan O'Brian. As the pot simmers and the plot thickens, this may very well work out for both veteran comics. At the heart of the matter, they just want to continue to do what they do best, make us laugh!

We'll be tuning in and watching as this Fall brings forth a new Leno show and some interesting TV programming in a depressed economy, when people need a distraction and a really good laugh!
Posted by Alicia Sanders at 11:23 PM