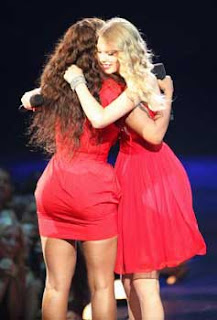 So much has been written and said about the now infamous 2009 MTV Music Awards. This year's VMA's and the Kanye West fiasco involving country music's teen sweetheart, Taylor Swift and the superstar Beyonce Knowles has made television history in company with the legendary Madonna and Britney Spears' kiss, Michael Jackson and Marie Presley's Kiss and other iconic moments during the show's history. But, nothing could prepare us for the crude outburst of Kanye West, taking the microphone out of Taylor Swift's hand to say Beyonce deserved her award, "Best Female Video."

Taylor Swift's an awesome rising superstar, an artist I truly like and appreciate. It was quite arrogant to say Beyonce was robbed, as if country music is less than other genres. We don't all like the same thing, but Taylor Swift is a very talented singer, songwriter and musician. Granted Beyonce's "Single Ladies" was a big hit, not everyone in this country and around the world loved it, I didn't. The song was a showcase of her splendid body and unusual beauty backed with a catchy anthem song, played in heavy rotation. But, to say it was the best is a matter of opinion. I was happy that she won video of the year because it was so popular, but to say the best is something else. Music has turned too much into the visual and not the quality of the music. I enjoy Taylor Swift's music because she invites you in to listen to her stories, remembering these are songs written by a teenager and as we all know, most writers write about what they know.

There's always good to come from any situation and Taylor Swift and Beyonce were inadvertently gifted by this awkward and rude moment presented by Kanye West. The very day after the awards, Taylor's star is bigger and brighter than ever and Beyonce's appeal widened. Nothing can erase the horrifying moments Taylor Swift endured that night, but at least, there's a silver lining to those clouds.