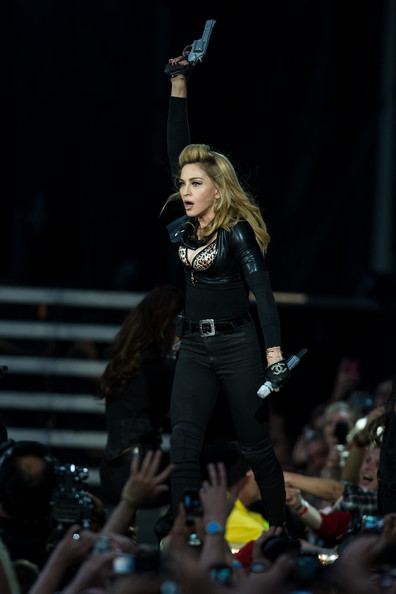 Madonna is celebrating her 54th birthday today! This music icon has become an industry staple as her light still brightly shines after decades in a business that’s seen many changes and declining sales since she released her debut album in 1983. This American singer, songwriter, actress, dancer and entrepreneur has sold more than 300 million records worldwide and is recognized as the world’s top-selling female recording artist of all time by Guinness World Records. In 2007, she signed a US $120 million record, touring and merchandising contract with Live Nation.  Her 2009 Sweet and Sticky Tour grossed $408 million, the largest for a solo artist and second to The Rolling Stones who last grossed $580. As haters continue to hate and some feel she should just hang it up, this force of nature continues to be relevant in the midst of a bevy of pop princesses, the Queen still reigns! Lady Gaga made her way to the top mirroring Madonna. Well, who wouldn’t be influenced by her; anyone who wanted to be at the very top, controversial, trendsetting and relevant for decades has been influenced by Madonna! She is considered to be one of the "25 Most Powerful Women of the Past Century" by Time Magazine for being an influential figure in contemporary music. Madonna is known for continuously reinventing both her music and image as she performed at the 2012 Super Bowl Half-time show and wowed! Madonna’s a “Boss” within the entertainment industry, undeniably so!

This style maker and mother of four joined forces with her daughter Lourdes and created a fashion design company Material Girl in 2010. Madonna’s offerings also include author of children's books and film directing and producing. Madonna’s currently touring and giving naysayers something to talk about as legions of devout fans show up to see her perform her number one hits (“Papa Don’t Preach,” “Like A Virgin,” “Vogue,” “Frozen,” “Music,” “4 Minutes”) and do what Madonna does best, create controversy!

Posted by Alicia Sanders at 7:58 PM