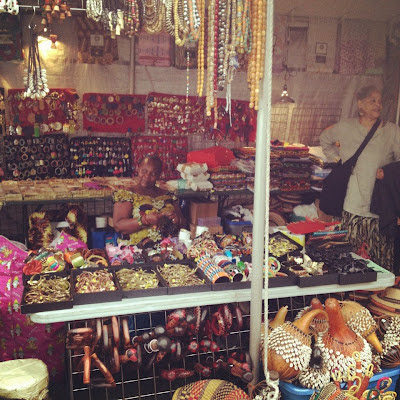 The African Festival of the Arts never gets old for myself and the legions of visitors that have come out for the last 23 years! This annual Labor Day Weekend festival is a summer blockbuster, for one it's in the heart of the city, nestled in the midst of urban neighborhoods, city lights in the big beautiful Washington Park. Chyrsler is the title sponsor and the list of vendors seem endless. This is the time of year to stock up on specialty apparel, jewelry, art, skincare products, music, great authentic Caribbean and African food and non-stop live entertainment! Lyfe Jennings and George Clinton were two of this year's awesome performances! I love the drum corner, it's such a cool place in the park to chill and listen to beating drums and anyone can join in and dance your heart away!


I caught Funk Music Master George Clinton and it was a great show! There were some significant changes, George's trademark rainbow colored hair was gone! The bass player who played and danced in the diaper is no more and Sir Nose is now 2.0. minus his usual elaborate costuming. It was something to get use to, but after a song or two, George Clinton and The Parliament's music speaks for itself! I found something else missing, one of George's most talented entourage singers, Belita Woods. I saw a friend of mine, a photographer and long-time friend to the group and asked where's Belita and was told she passed away in May from massive heart failure in her hometown of Detroit. I was devastated because I always came to see Belita as much as George. If you like Janelle Monae, you'll love the vocals and music of Belita Woods! George has worked with some of the best and most distinctive artists in the industry like Bootsy Collins. I always loved the freedom he allows artists onstage. I employees a lot of people per show and this is commendable, they create such incredible sound and as George Clinton calls it "ghetto metal." The group took the enthusiastic crowd on musical journal with their cult classics from "Flashlight" to "Atomic Dog" complete with fraternity Q-Dogs dancing onstage, big fun!


This is a back-to-school, end of summer event not to be missed and such a cultural and enriching experience as one of the biggest African Festivals in the country! Next year, be sure to take advantage of early bird specials and discount tickets. There's something for everyone and the Africa International House always bring their A-Game! Keep in touch with them year-round as they help keep African culture alive!