Chicago Teachers' Strike Is Over! 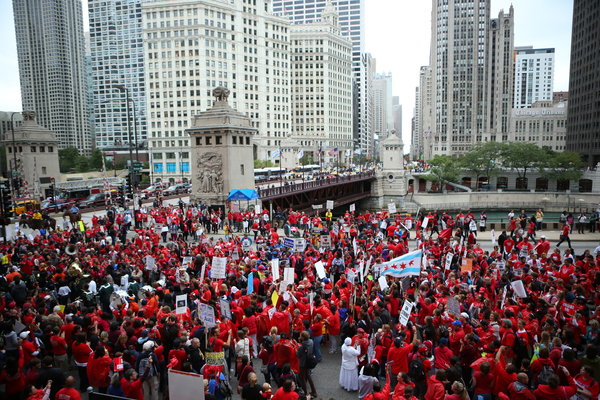 This has been an eye-opening experience for  politicians, administrators, unions, teachers, students, parents and citizens across the country as we've watch this process unfold. Regardless of your position or stance on this teachers' strike, it has been a wonderful civic lesson. It was more than a union teachers' strike, but an awareness of the disparity of educational resources within the public school system. I fully support teachers and have always marveled at their dedication and the extent they go through to perform their job. While they're certainly bad teachers and some there just to collect a paycheck as well as there are Board of Education administrators who have special interests and private agendas, I believe most teachers perform their jobs within the system's constraints. Without giving all schools the same equity, parental involvement and autonomy over lesson plans as they have now received, principals with the power to get rid of bad teachers and social services for troubled schools, we can't expect much to change! However, I do believe this is a great start in changing public school education in Chicago without eliminating the teachers' union and privatizing the entire public school system to a charter school network! Many of the same problems will persist! Below I found this parent's analysis dead on and the discussion enlightening from the Catalyst Chicago!


What A Parent Believes...A Must Read!

Why this parent blames the mayor for teachers strike

I think the mayor is just plain wrong and at fault for the current strike. I think he set out to demonize the teachers and imply they were overpaid and under-performing.
By: Melissa Lindberg / September 17, 2012
My kid is in a Chicago public school—a really good one, with selective enrollment, great teachers, and a great new “green” school building that is LEED-certified - but has no air conditioning. And here’s the thing: It's getting warmer earlier--in the 80's last March, and hot in school. You know what? It's hard to learn and to teach when it’s too hot. The heat makes it difficult to concentrate.

Why is this relevant? The lack of air-conditioning in some schools is just one of the issues that have been raised by teachers in the current strike. In Track E schools, students were in non-air conditioned schools during several days of over 100 degrees and weeks of over 90 degrees. Were the kids there to actually learn, or to make the Board of Education feel good that they’re providing extended school hours for them?

Click to read more at Catalyst Chicago >>
Posted by Alicia Sanders at 10:06 PM